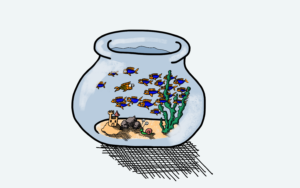 I was 27 when I truly realised how the norm can influence your behaviour and limit your thinking. It was when I was backpacking in South America. I had plenty of time and wanted to discover Brazil after being in Venezuela. I took the plane from Caracas to Sao Paulo. Just before we landed at our destination, you could already feel some hecticness going through the plane. Some people were already collecting their hand luggage before the plane wheels had even touched the ground. Somehow, and unnecessarily, stress was created. People were rushing and for some, it felt like they were running to their next destination.
Automatically, a flow built up and the other passengers and I were caught in a mass of people going in the same direction, to the exit. Some were lucky as someone picked them up, others were grabbing a taxi, but as I was on budget travelling I went with the flow who was taking a bus to the city centre.
After a few minutes of landing in Brazil, I ended up queueing in the line to buy a bus ride. On a big banner, you could see the cost of a one-way ticket to the city centre. It was approximately $10. As I had many people in front of me I was checking the surroundings. I saw a man cleaning the street outside the terminal. I looked at him and I started to think. I thought about how much money this man would earn a month and questioned if he could afford to pay $20 each day to get to work and back home. I went outside and approached this man with my broken Portuguese. I asked him how to get to the city centre by bus. As I was a tourist, he instantly showed me the place where I was queueing before. I said to him that I wanted to know where he takes the bus. He got my point and showed me the public bus station, which was located just behind the terminal. I went there and, as I had assumed, I paid only $0,5 for the one-way ticket.

This experience was another eye-opener for me. It demonstrated to me how others can influence me.

” Everyone has a talent”

The point I want to make is that you should not allow others to think for you and make up your opinion. Every individual should think for themselves and live their own life. Time is limited, so do not waste it living others’ life.
Ask yourself what you want. Ask yourself what the purpose of your life should be. Ask yourself what is important for you and find out your dream(s). What are the things you would regret if you cannot accomplish them?
Now and then, you need to make decisions in life. What is important is that you do not look back and regret the decisions you have made. Have an action plan and be disciplined. And be true to yourself. Listen carefully to your gut and inner self. Your heart and soul will guide you, in the good and also in the hard times.
Money comes, and money goes. I have yet to witness a rich person taking all his wealth with him when he passes away. Do not give up things for being in a comfort zone and for money, and do not pursue a job just for the money. Find out what you are talented at. Everyone has a talent.

https://thejump.info/wp-content/uploads/2020/05/LinkedIn-video.mp4 Fresh off the press!!! Join us on our “Career Club” live talk on Instagram (musti_toga) each Wednesday for the next 5 weeks. Grab a copy of the book “The Jump: Land your dream job” Read more…

Will you be going with the flow and, like most people, give up on your dreams bit by bit? Will you be a member of the mainstream and eat what everyone else is eating, do Read more…

Any cookies that may not be particularly necessary for the website to function and is used specifically to collect user personal data via analytics, ads, other embedded contents are termed as non-necessary cookies. It is mandatory to procure user consent prior to running these cookies on your website.